I went on my first cruise last April 2018. It was a family trip to celebrate both my grandparents’ birthdays and wedding anniversary, and my grandfather decided to spend it aboard the Royal Caribbean.

The Royal Caribbean ship is huge, and can hold up to almost 5,000 people. It has all sorts of amenities (as other blogs and videos will show), houses different restaurants and holds activities and entertainment on board. The ship was great, and so was the service. And since I found several blogs and videos online to be helpful in giving me a better idea of what to expect, I’ve listed down a few tidbits below. 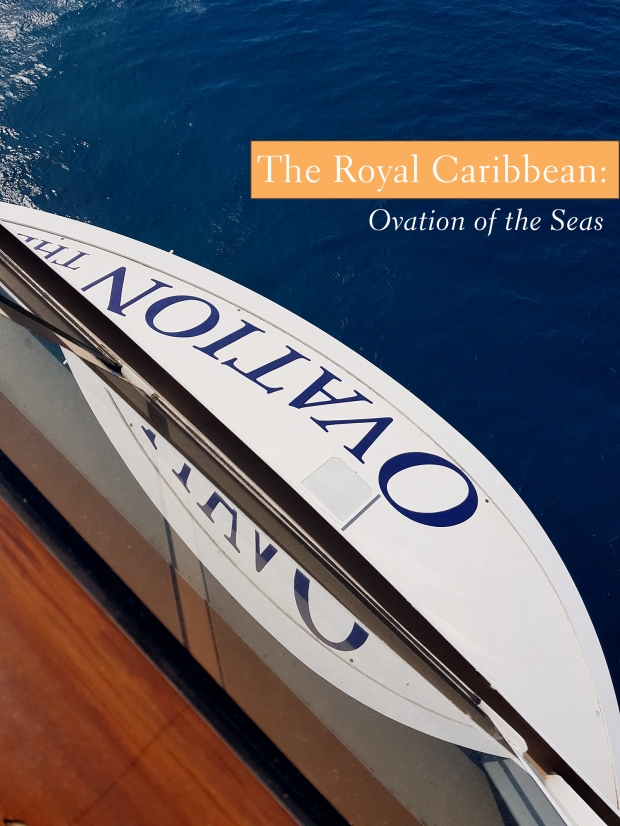 The crowd you’re with on the ship makes a big impact on your experience. We docked in HK, so majority of those on the ship were Chinese. There was a lot of pushing, spitting and smoking in some areas, which made it quite uncomfortable. But because the ship is huge, you’re bound to find spots to get away from the crowd. A lot of them wanted to attend the shows and stay in the eating areas. What we did instead, was to hangout in the  lesser known drinking areas of the ship (Solarium), workout in the gym, hangout in the activity center or chill by the deck. These areas were pretty empty most of the time. Our friendly bartender at the Solarium said that if this were a cruise that docked in Australia, the bars instead would be packed, and their shifts would be ten times crazier than it was when we were there. 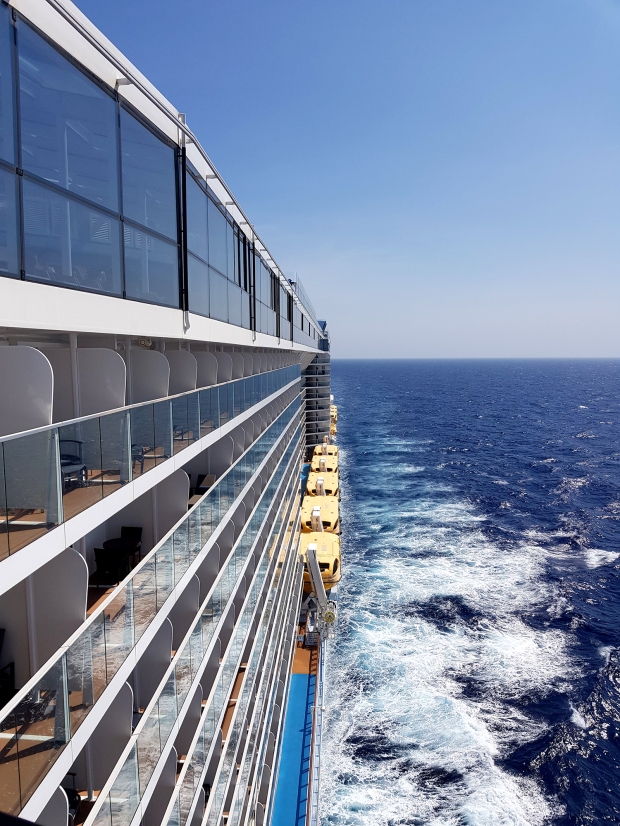 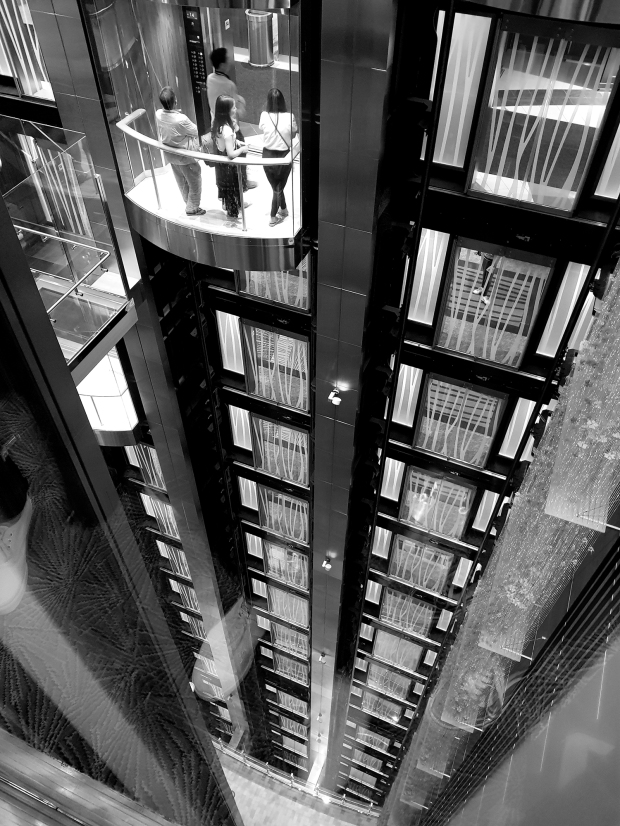 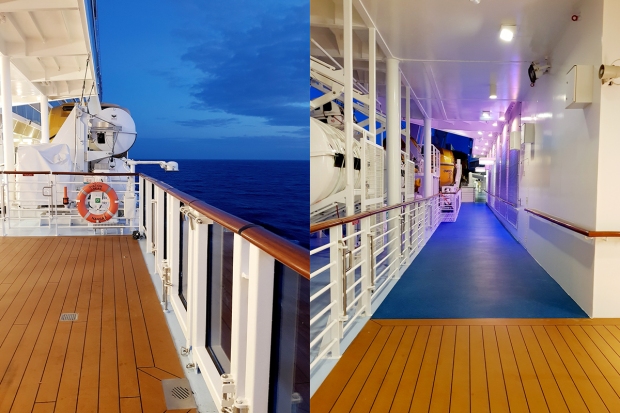 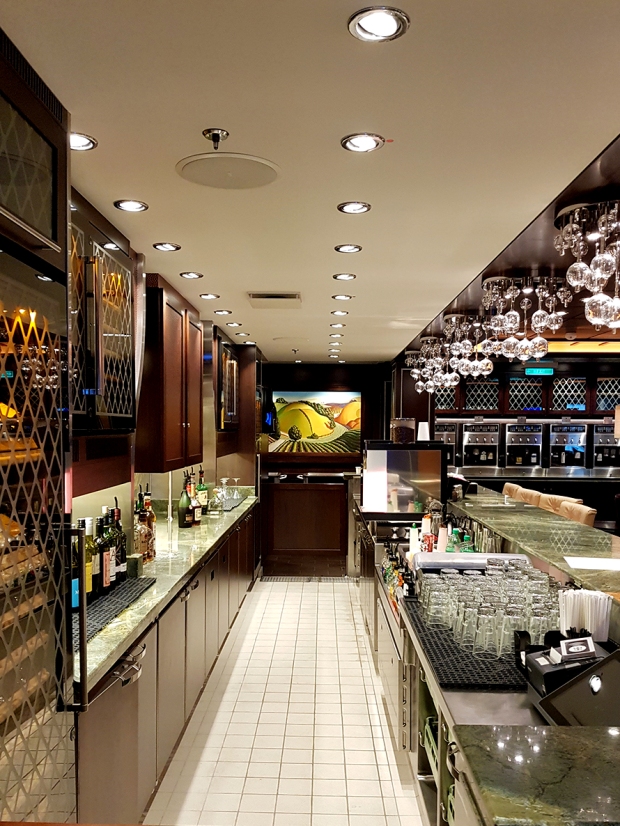 Sans the crowd, the amenities were great. We were really impressed with the gym, which  was huge and well-maintained. It looked and smelled clean, was organized, had a good set of equipment, and had a great view. It was even bigger than some gyms I’ve been to in Manila.

The activity center was also impressive, with the bumper cars, court, pingpong tables, air hockey, video game room, and more. There are so many activity options in this area alone, it’s impossible to get bored.

There were about three big pools in the ship, two indoor and one outdoor. Since the crowd also liked to hang out by the pools, we just chose to stay out of it and watch from afar. There’s a bar (North Star) overlooking the pool, where they sometimes played movies so you could swim and watch. 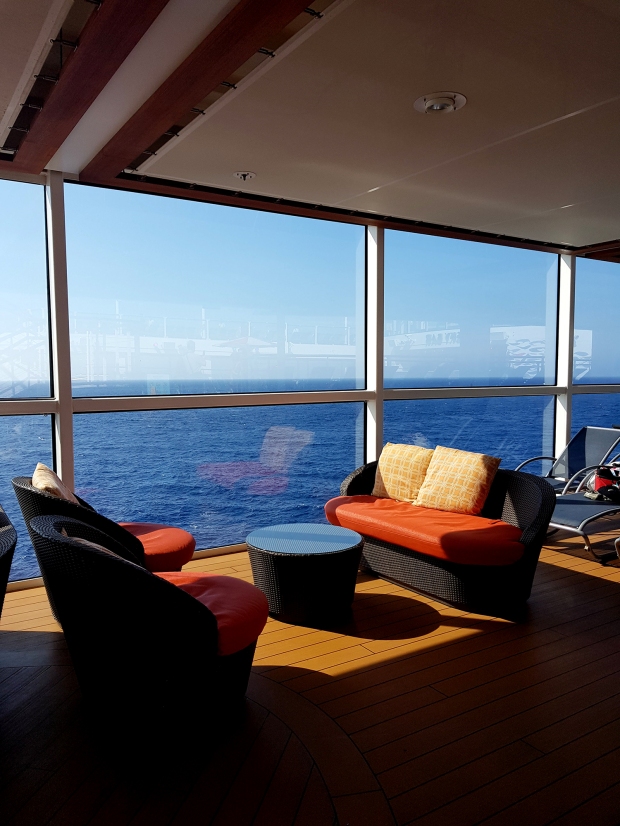 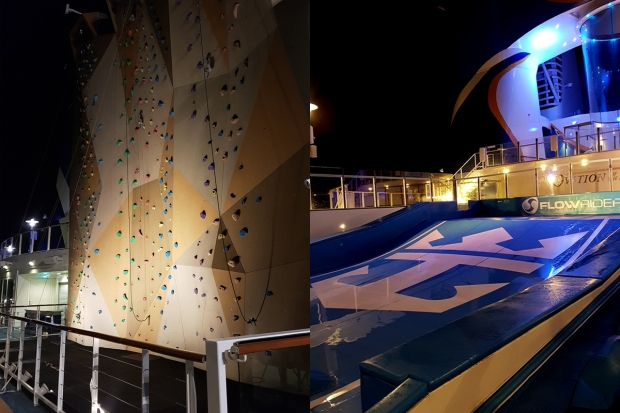 The food and drinks

The food was a bit inconsistent for me. Presentation was always very attractive, but some dishes were either really delicious or so so. I guess since they were feeding different groups with varying palettes, they intentionally didn’t make the flavors too strong so that in case you wanted to add more flavor, it would be easier to add. Keeping this in mind, I’d say the food was still on the pretty good side. 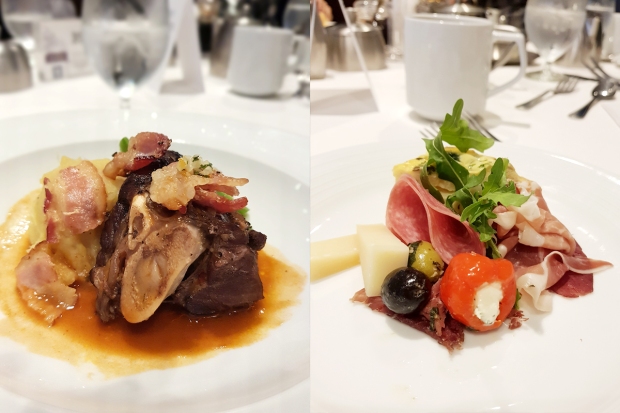 What exactly do you pay for when you get on the boat? Well, what you DON’T pay for are your breakfast, lunch, dinner (unless of course you opt for the special menu that does have extra payment), the use of the activity center (court, ping pong, air hockey, etc.), the track, and gym. Everything else, like alcoholic beverages, special activities like the wave pool or the North Star, will need payments. And they’re not cheap.

Since you to have to make payments on board, make sure to have your money changed before the trip. I made sure to carry around HKD (since we extended after the trip) and USD (for the ship). Because I wasn’t able to get Vietnamese Dong, I ended up using a credit card on the ship, and used my USD while in Vietnam (which thankfully, they accepted without having to change to Dong).

A tip for drinks: They have special promo cards wherein you could get 12 drinks for X amount, which comes out cheaper than buying the drinks individually. If I were you, take it! 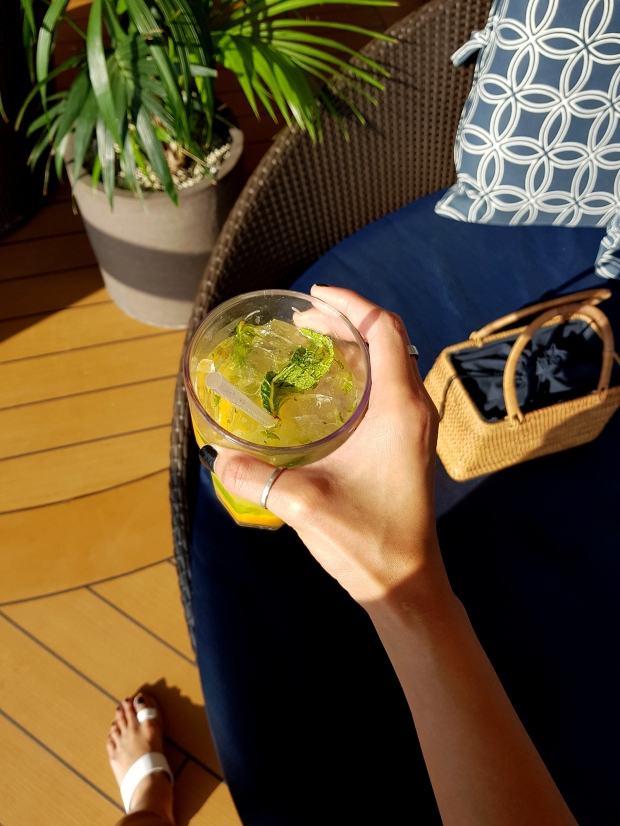 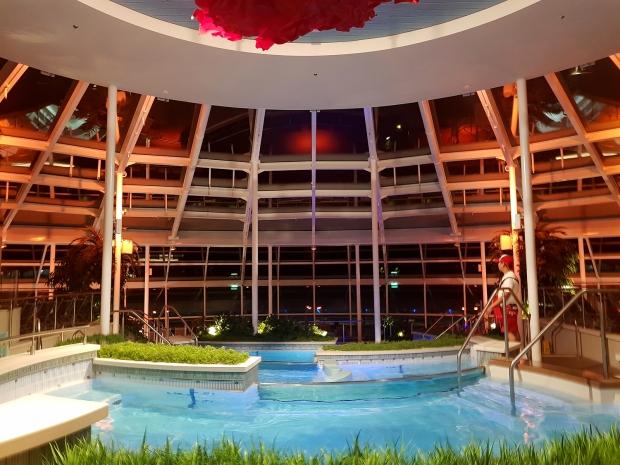 We had two Vietnam stops throughout the trip. As expected, lines to get in and out of the ship took a while. being a pretty big group (we were around 24) of oldies and babies, we decided not to get a tour package because (1) it was pricey and (2) we didn’t want to get stuck with the group. Once we disembarked in Da Nang, we immediately found a van to take us to Hoi An, and we got to explore the place the way we wanted to.

One important thing to note: taking a cruise is not the best way to travel and explore a new country. You only have a few hours in a certain area, so don’t expect much. Just be ready to have a good meal, some coffee, and a quick window shopping opportunity before you have to head back to the ship. 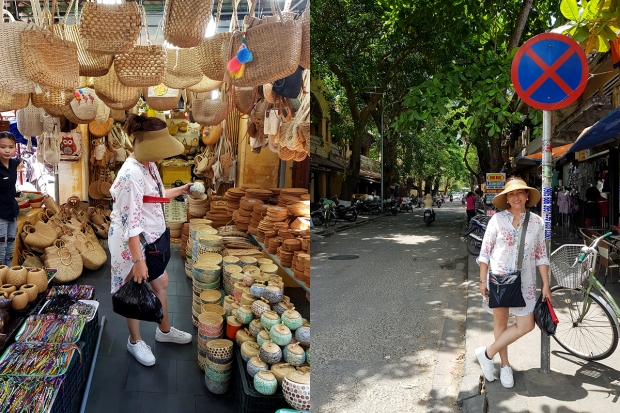 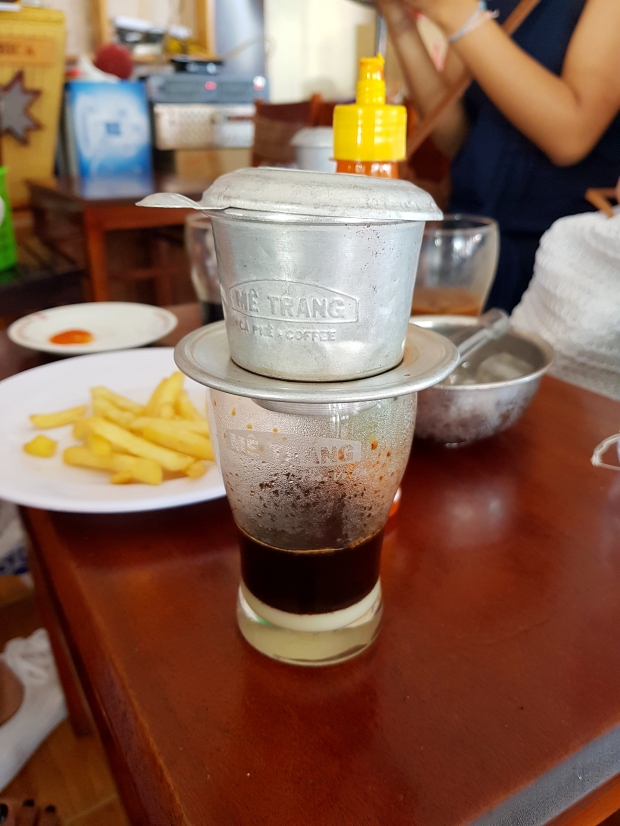 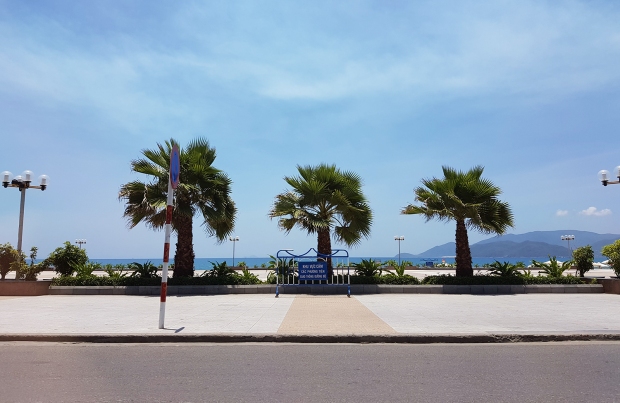 When you have Filipinos serving on board, you already know you’ll get great service. From the room cleaner, to the restaurant waiter, to the bartender–most of them were Filipinos, and they truly made our experience on board unforgettable. Our favorite friends on board–Melchor (Filipino) and Agus (Indonesian)–can be found at the Solarium. Should you ever see yourself aboard the Ovation of the Seas, they will truly make your trip a memorable one.

Overall, I think the Royal Caribbean cruise is spectacular. There are a lot of things that made our trip memorable, but also a few things that we wished were different. Despite the downs, you could really see that the quality and service of the ship is on a different level, and I would highly recommend it to anyone who is thinking of  going on a cruise. The most important thing about cruising is having the mindset that you’re on a cruise, and not on a trip to travel and explore. That’s a major misconception about cruises–that you get to visit X countries in such a short span of time. The cruise will allow you to do that, but majority of the time will be spent at sea, where you spend time attending shows, using amenities, eating, drinking, and basically enjoying the ship. Given that, you’ll want to make sure the ship you’re on is a a really good one. For this I’d totally recommend Royal Caribbean.