Yesterday I tried out a Korean restaurant called Masarap Korean Grill. It was so unusual hearing a Korean place called Masarap, but when my sister invited me to try it out, she got me at Korean food (my second favorite cuisine) and bang for buck.

The restaurant is located along Aguirre Avenue in BF Homes. In the line of restaurants in this area, you most likely won’t choose this place as a first option because of its nondescript exterior. From outside you wouldn’t even be sure if it was a restaurant or a place to buy meat, because the first thing you see is the meat cutting section. You might not also see the sign immediately, but once you see Pan De Manila, the restaurant’s to the left.

This is Sur Yong Su, the restaurant owner. Once I entered and whipped out my camera, I turned to him and he said “Me,” and was ready for his shot. He can speak very little English but his staff of two people  in front are Filipinos.

I learned later on that the place actually does sell meat, so you can choose to just buy and cook at home or dine in.

This is what came with our meal. Lettuce for wrapping, onions and garlic, a salad, Kimchi, some sauces, and two soups: Denjang and Egg soup. These items are all complimentary and are unlimited. One thing I was happy about was that they served it in bigger plates instead of the mini bowls I usually get in other Korean restaurants. It makes it more convenient to eat!

Their Denjang soup is amazing. It’s so spicy and flavourful, exactly what I love about Korean food. It was my first time to get Egg soup at a Korean place and I didn’t understand it, but while I was having it during my meal I realized it helped balance out the strong flavor from the Denjang. 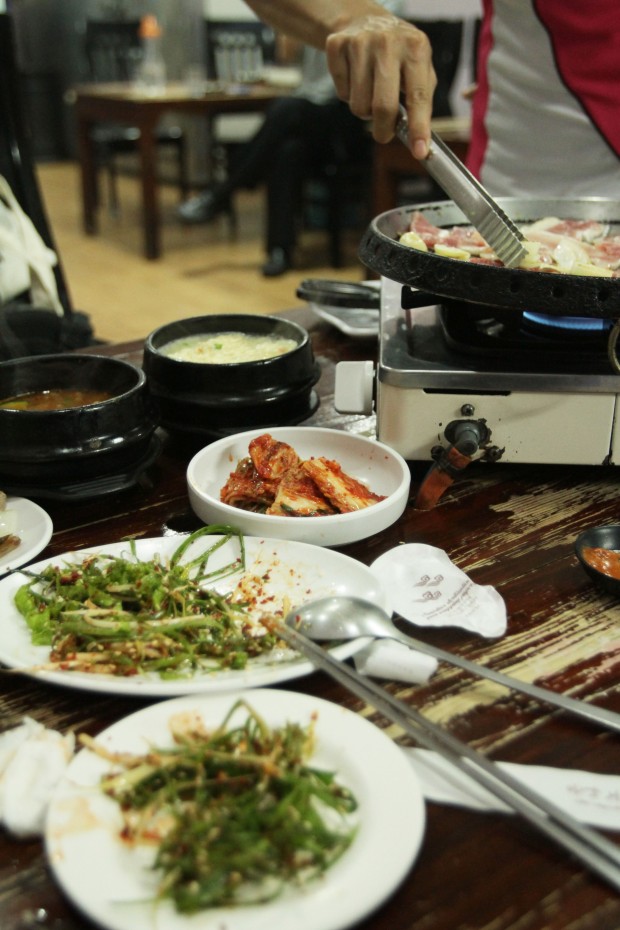 Sur Yong Su started cooking the meat for us and later on his lady staff took over. The meat was good, though I think some of the pieces were a little overcooked so they became a bit too tough for my liking. Nevertheless, it was still very delicious and my sister and I devoured the the pork and beef.

Sur Yong Su had a friend over and he offered us some Soju. Perfect of course with the meal! His friend spoke English (with some Tagalog in it) so we were able to have some conversation about clothing and the blog. 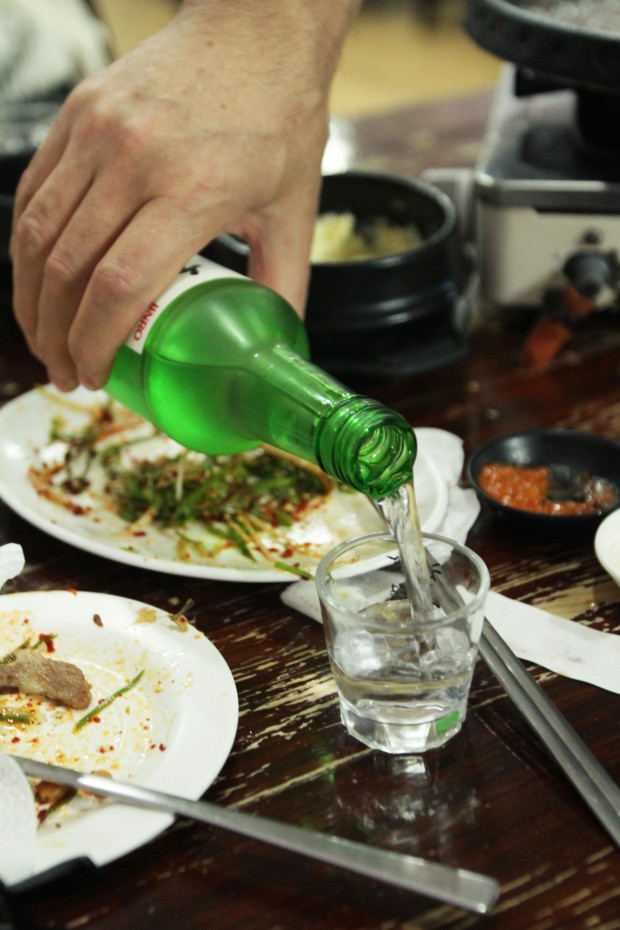 After several seconds of the delicious sides, some soju and meat, we were stuffed. My sister and I paid Php 650 (for two) just for the Pork and Beef Samgepsal + a cup of rice, and we were able to get a load of their salad and soup. The Denjang soup and their salad are really delicious, we just kept requesting for more. The meat was also good and more than enough to feed two people.

I finally now have a new Korean go-to in Aguirre! For those who miss Sam Won and just need a good Korean fix around this area, you might want to pay Masarap a visit. Its menu may be a bit more limited than usual Korean restaurants, but the little they have to offer is very affordable, and Masarap talaga siya!